Buy Men’s Men’s Flying Tigers A-2 Fighter Group Leather Jacket Made up of sheepskin Leather and finishing with Semi-aniline. Inner shell made with Quilted Polyester Lining and closure Zipper style with two inside and Two outside pockets. Care Details: Do not wash, bleach, tumble dry, or iron. Soft dry clean only.

The Bomber jackets were originally introduced for the pilots during the First World War and they were called the flight jackets or letterman jackets. The bomber jackets have ever since been in fashion and are still worn very frequently in different parts of the world.

Originated During The World Wars

During the world war, most planes were not equipped with closed cockpits and therefore the pilots would bear with freezing temperatures in high altitudes. These jackets were introduced so that they could keep the pilots warm and comfortable. These were first employed by the US army.

The very first designer of the bomber jackets was Leslie Irvin who made these jackets using sheepskin leather. In 1926 Leslie set up his company in the United Kingdom and was the main supplier of the jackets.

Entered The World Of Fashion

Later during WW2, the demand increased a lot and the company was not able to keep up with the increasing demands and therefore used subcontractors to match the demands.

The jackets were then made of different shapes and colors with many different designs as they slipped into the fashion world.

The Flying Tigers was a group of pilots from the US army who volunteered during the Second World War. The group was actually named as The First American Volunteer Group. The aircraft would in the American authority and control in Chinese colors. The aim of these groups was simple, declare war on Japan and to enter Japan, and drop bombs there.

The group wore special jackets made to keep the pilots warm and safe. The jackets were bomber jackets and called Mens Flying Tigers A-2 Fighter Group Leather Jacket. These are still used by many armies and air force personnel around the world. The jackets are now even used by civilians as a fad.

Composition Of The Jacket

The jacket is made of faux leather or sheepskin leather. There’s a viscose lining inside the jacket which keeps the jacket warm and comfortable all the time. The collar is shirt styled and the closure is zippered. The cuffs are rib knitted and the pockets are two front flap ones. The color of the jacket is brown. And the jackets carry a Flying Tigers patch on the chest. 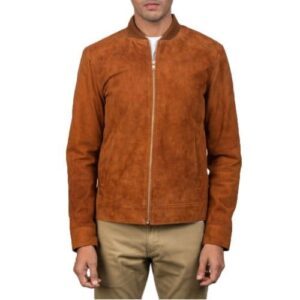